An incredible journey cycling through the stunning rolling hills and rainforests of Uganda. The adventure offers a once in a lifetime opportunity to encounter the Great Mountain Gorillas of Uganda in their natural habitat. *Gorilla viewing optional extra subject to permit availability and additional cost of USD 1750.

FUNDRAISING: This charity challenge is empowering you to cycle through the stunning green hills of Uganda while fundraising for our charity projects in Uganda: Kisoro Children's Foundation and SoftPower Education.

Together, our goal is to raise USD 23,000 for Kisoro charity and USD 20,000 for Soft Power to support school renovations.

We advise each individual to fundraise USD 1,375 (AED 5,000) so that together, we can succeed with this incredible educational project and support over 875 children in need attending the schools.

FITNESS LEVEL:
This challenge is rated as demanding which requires a good level of health and fitness, comfort riding a bike off-road on varying terrain including steep inclines for up to several hours per day. Click here to read more about the challenge fitness ratings.

TRAINING:
We run a variety of free, weekly training sessions that we encourage you to join before the challenge. Registering for this challenge grants you unlimited membership to Gulf for Good's soulFIT fitness and hiking community. Click here to read more about soulFIT.

Either pay at once or opt for our easy installment plan below.

This event is under process for approval by the Islamic Affairs and Charitable Activities Department.

On arrival in Entebbe, we will be met by the guiding company and transferred to the guesthouse in Kampala. Time permitting, after a quick freshen up, we will be able to explore the city by foot.

Our welcome dinner will be followed by a challenge briefing.

We start after breakfast with bike fitting and our mechanics will be available to help you setup the bike properly. We then start cycle around 4km through town to Port Bell from where we will take a boat to cross part of Lake Victoria (30 minutes).

We will cycle through a beautiful green environment with small villages. Halfway our trip we will pass the famous Ssezibwa Fall. The waterfall is truly beautiful but has a dark past in the history of the Buganda Kingdom.

After a picnic lunch at the waterfalls, there will be time to make the short hike to the top of the falls, we will continue our tour and cycle into Mabira Forest. Mabira Forest is one of the few indigenous forests close to Kampala, but both sugar and tea plantation winding terrain over the jungle. We will sleep in tents at Griffin Fall Camp in the heart of the rainforest.

Dinner and a night under canvas.

Today’s ride will be through tea plantations and sugar cane fields. The tracks can be challenging due to short climbs

here and there. Today we will reach the source of the Nile in Jinja. The Nile is the longest river of the world. Before it ends its long journey at the Mediterranean Sea in Egypt is passes through South Sudan. A short boat trip will show us the official source after which we will be transported to the other bank of the mighty river where we will have lunch at Deli, the best sandwich lunchroom of town. After lunch we will cycle through Jinja, use the newly constructed bridge and cycle along the Nile towards our accommodation for the night. We will camp at Nile it!

Overnight in tents at Nile it! campsite

A full day cycling along the mighty river. This relatively easy ride on the banks of the river will bring us to Father Joe’s estate.

The first thing we will do today after a hearty breakfast is crossing the Nile so that we can spend the day cycling on the Eastern side of the Nile. The tracks will be relatively flat. We will pass through many small villages until we will reach Kamuli.

Overnight in tents at Busoga High School, bush camping (only pit latrines available, but bush toilet and shower will be provided)

Overnight camping in tents at in the grounds of one of the schools built/renovated by the charity.

Today we cycle largely through sugar cane fields enjoying amazing views, to Bugembe view point, where we will visit the King of Busoga palace at a high view point enjoying great views of Lake Victoria, Jinja town and the surrounding areas. From here, it is a nice downhill ride cycling the final stretch through local villages. Arrive at Explorers River camp after navigating through small roads among villages along the Nile, formally known as Bujagali Falls, which marks the end of our cycling.

Enjoy the stunning views of the Nile during our farewell diner.

After breakfast we will travel back to Entebbe, you are free to visit the conservation center or the botanical garden before catching your international flight back.

We travel to Entebbe as soon as 4am to be able to make the 7am flight to Kisoro. In Kisoro we transfer to Mutanda Lake resort where we can spend the day relaxing and enjoying the view of the volcanoes that form the border with Rwanda. Or perhaps go for a refreshing dip in the lake (it’s safe: no parasites, hippos or crocodiles), take a boat trip to one of the islands or go out on a hike.

The following day you will have to get up early to drive to the gorilla tracking gathering point. A beautiful experience awaits you. After the tracking we transfer back to the lodge for overnight.

Note: This is an optional extension package with the following inclusions:

Notes: This itinerary may change due to border regulation changes, unusual weather patterns, wildlife movements, group strength, etc. We will endeavour to keep to the planned itinerary, but cannot be held responsible for last minute changes that might occur. In all such circumstances, the lead guide will have the final say. 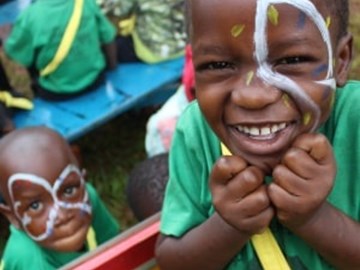 To renovate and refurbish 7 classrooms and make them wheelchair accessible.

Soft Power Education (SPE) has a mission to “Improve the quality of life through education”. Since 1999 we have been working in the Jinja District of Uganda, where the source of the Nile begins its journey towards the Mediterranean Sea.

We work in three key areas:

Our core programmes include two pre-schools for 180 of the most disadvantaged children from the communities of Buwenda and Kyabirwa, a Special Needs Programme working with over 130 children with disabilities, the Amagezi Education Centre through which we partner with over 1000 P6 pupils from 12 partner schools and the Earth Power Project under which we focus on protecting the environment in the Busedde and Buyengo sub counties.

In 2015, Gulf for Good fundraised to renovate and paint 9 classrooms at Namaganga Primary School under our School Infrastructure Development Programme.

In 2020 we are fundraising to completely renovate seven classrooms at Nkondo Primary School where 605 pupils attend school. This renovation will ensure that the children are learning in safe and inspiring classrooms.

We are aiming to raise USD 23,000 to purchase a playground, playing field, football pitch and netball court. These will be used by the 267 students of the school and by many more children in the local community.

"The playground will benefit the children in the school and those in the community during weekends and holidays.  When it comes to play, majority of children in Kisoro are left on their own to figure out what to play and often they end up playing with dangerous objects or in dangerous places like swimming in stagnant water,” says the school’s director. Having a playground at Ineza will enable many children to experience playing in a safe and fun environment for the first time in their lives.’’

According to the 2014 census in Kisoro, Uganda, 86% of households have subsistence farming as their main source of income. 60% of the population is under 19 years of age. Only 25% of girls aged 13-18 are in secondary school. 39% of children aged 10-15 are working. Among households in Kisoro District, less than 8% have access to electricity and about a third have access to piped water, but this water is untreated. Public schools are crowded, often include physical abuse of children, and generally have no food or clean water for children.

"One of our objectives is to encourage learning through play. We believe that children can explore and learn a lot through play" says Jackie Baganizi, Director of Ineza Parents' School in Kisoro. Most of the schools and public spaces in Kisoro and in Uganda lack play spaces for children.